Another Monday, Another Release

We've just released an update to School Yourself Beta, with new lessons, updates to older lessons, and a host of additional features. Here's a sampling of what's new:

We've added two new lessons on angles (both in degrees and radians) and trigonometric functions (what sine, cosine, and tangent mean, and what their graphs look like). These lessons include six new interactives, and here's a screenshot of one of our favorites, which comes about halfway through one of the lessons: 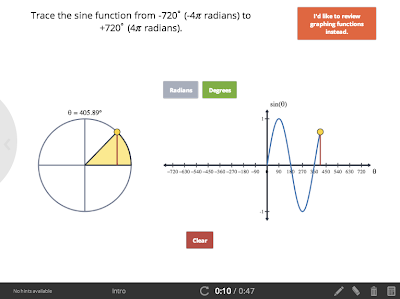 In this interactive, you can sweep through different angles in the unit circle. For each angle, the height (indicated by the red line) of the yellow point on the unit circle's circumference is the value of the sine function for that angle.

A major part of the Beta is improving the School Yourself experience with every release. So not only are we adding new content, but we're studying the user experience for every lesson, and listening to what our students are saying.

One requested update was that mixed fractions should be acceptable answers. So we fixed that. We've also updated the lessons on slope and linear functions (some users found the tick marks confusing when the questions were asking for algebraic expressions).

As we continue adding content to the Beta, we'll keep improving the content that's already there. So keep the feedback coming!

Aside from accepting answers that are mixed fractions, we've also upgraded the "laser pointer" that appears in the lessons. The red dot moving around the screen was analogous to a cursor you might see in other online video content. Well, we replaced it with a new highlighter that fades, and early user testing suggests that this highlighter flows more seamlessly with the content.

Right now we're hard at work on delivering the most expansive lesson we've ever built, covering a wide range of trigonometric identities. You'll get to work through the various proofs, and seamlessly jump between them when you need one to prove another. We'll let you know as soon as this lesson becomes available.

So that's a summary of what's new with the Beta. We'll let you know as soon as the next update is out. Until then, keep getting schooled!
Posted on Monday, October 14, 2013